This fall, French I has been taught orally. The students have not picked up a pencil in class since September. They are learning to speak French in an authentic way. Two years ago, Mr. Crofton helped the FLEX class to produce funny videos featuring animals decked out in all kinds of clothing. The students wrote descriptive sentences and recorded themselves. That project went well. This year’s group wrote nothing but they recorded themselves “reading” the text-less book, in a manner similar to a child’s picture book.

The books produced were fun and funny. They featured a dapper otter, a neat bear cub putting away his clothes, an over-dressed, hungry gray squirrel and a sleepy fawn getting ready for bed. But the best part of the project were the audio components. The students did not read the text; instead they told the story. Their pronunciation was not always perfect but their words were perfectly understandable. The vocabulary learned and retained through this project has been impressive. 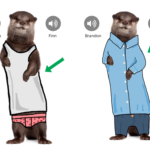 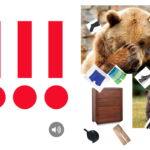 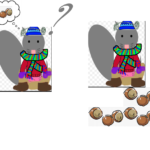 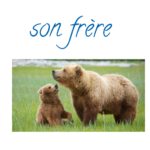 You can download two of the ebooks complete with embedded audio from these links: L’ours et Son Frere, Luther la Loutre. They work best when read in the iBooks app on Mac or iPad.